On Sunday I posted a piece on Rene Syler’s Good Enough Mother about how watching the TV show Dr. Who brings my family together.  You can click on that link if you want to have the details of why.

But tonight, my dear readers, was the night.

You see, normally I don’t get snowed by my kids’ whining or crying or complaining that they don’t get the same things as other kids or that they desperately want to do something.  I don’t even fall for the “I’ll clean the house/bathroom/kitchen/do laundry/clean my room begging, either.  I’ve been parenting alone for too long to fall for that.  If anything, their rooms will look worse and I’ll be lucky to keep the areas of the house where everyone sits in working order.

But when my son, Sam, who never complains much, was talking to the woman cutting his hair a couple weeks ago I overheard him.  He didn’t think I could hear him out in the front lobby, but I did.  He talked, incessantly, about Doctor Who, the 50th Anniversary special (which actually aired – for free – on Saturday November 23rd) and how the theaters were showing it only on Monday, November 25th, and it was in 3D!  That was followed by “but my Dad says we can’t go.  We can still watch it on TV, though.”

So I caved in.  No, it wasn’t from embarrassment, nor was it feeling sorry for Sam.  No, the reason I caved?  The fact that he wasn’t complaining.  The lack of complaint or expectation that I’d take him to the theater just made me make meals with a few more things in the freezer or stretch the grocery budget just a bit so that I could take all three of them to the theater to see it.  I had them have sandwiches for dinner and raced home from work so we could get to the theater in time to print the tickets I’d bought in advance.

When we arrived . . . there was a line out the door.  Literally.  I figured on a Monday night, two days after the show aired on BBC America, there’d be hardly anyone at the theater.  I was so totally wrong.  The first two showings (of four, they had to add 3 more) were sold out when I got there.  (Thank God for Fandango advance tickets)  We saw every permutation of every character from the show.  My sons looked around in wonder, telling me they should have dressed up . . . because nearly everyone was.

The funniest part – and this is truly funny – the theater posted a bunch of security around the people in the queue waiting to go into their respective theaters.  Security.  Like a bunch of geeky people (myself included, not delusional here) dressed up like a silly madman in a blue box standing in line were a riot concern.  “None of us has the strength to hurt anyone,” my daughter Hannah commented.  “It’s not like the crowd that might come to a Metallica movie.”

The theater was packed.  The movie had trivia in front of it.  (Did you know Ridley Scott was originally tasked with creating the Daleks and was moved to a different department at the last minute?!)  A special introduction by a Who alien creature and then by both Matt Smith and David Tennant – stars of the movie – with a cameo by John Hurt.  There was a showing of a making-of after the movie.

And my kids sat, in stunned and abject awe, staring at the 3D screen with their show, larger than life.  When a brief glimpse of the next man to play the Doctor appeared . . . then the eccentric and elusive actor who played the 4th incarnation . . . my kids burst into applause and laughter.  They all knew who they were. 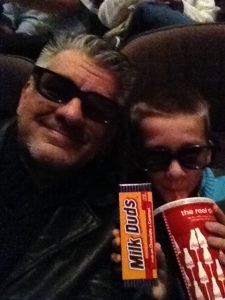 Sheer joy – and that’s a word I don’t often use, joy.  But staying up past their bedtime, having Icees, and watching their favorite show, a night of the Doctor (okay, Day of, there was a prequel called “night”.  Sue me)

There was nothing quite so joyous.