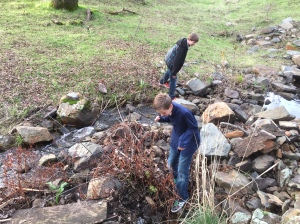 The picture is appropriate for the title, I think.  There’s a kid, standing on a group of large rocks, the soil underneath made less stable by the wash of water that has just run down the creek.  My son was trying to cross and simultaneously keep his new shoes clean and avoid falling into the water.  The ground is shaky and unstable.

It is a metaphor, by the way.

That same boy has had myriad problems at school this year.  The bigger issue isn’t what’s going on with him it’s what his father can or cannot do about it.

I have twin boys.  One is a complete extrovert, a flirt, on student council, can talk to even the most silent and stoic of people.  The other is an introvert, shy, reserved, likes movies and video games and would prefer to run around acting silly to running on a football field and getting tackled.

The lack of athleticism, or for that matter, the complete lack of interest in athletics at all, leads to problems.  In an area where soccer, football, baseball and basketball are staples and kids are enrolled in early leagues, rec leagues, competitive leagues and . . . oh yeah, the regular school teams . . . he is the odd man out.  I don’t honestly believe he’s not able to do any of the stuff it’s that a) he cannot stand when he isn’t successful instantly so screws around and b) the other kids ridicule him constantly for being unable to play at their level.

This also leads to his getting bullied at school.  He’s been hit, had his PE clothes stolen (twice) and his water bottle taken, lunch taken away and eaten, and been made completely miserable.

I have to say here that I understand what he’s going through, though nothing like the degree he faces.  When I was little I was sick a lot, had asthma when it wasn’t really a known illness, and truly didn’t have as much athletic ability.  I played basketball and tried to play football, but I actually enjoyed it.  I was made fun of because I would talk about things that fascinated me but they just didn’t fascinate anyone else.

My son would be happiest if everyone just left him to himself.  I wasn’t that way, I actually did want to play with the other kids and play basketball and such.  When it came to that I wasn’t the brunt of the abuse my son gets, I did try and wasn’t as upset when it didn’t go well.

My dilemma is the fact I don’t know how to help him.  He hit the point of it not being safe and he’s had one situation rectified.  But how do I give him the tools to get better?  How do I inform him that people like this are going to be around all his life?  I tell him, but how does he see and realize it?  Does he learn guitar more and more and show them up in a couple years when he’s screaming a solo like Marty McFly in Back to the Future?  Does he ignore it?  Do I get him boxing and build up his muscles so he can stop them in his tracks?

What we came to in a middle ground was he has to be comfortable with the solution himself.  He can certainly run and work out with me and get stronger.  He needs more confidence, which is something I didn’t have myself at that age.  It’s jr. high.  Nobody has confidence.

In the end . . . it’s as much about my finding my way with him as it is him trying to survive the battlefields of middle school.

That may just be the scariest part of all.

It isn’t often that I post about my work.  I’m sure you see bits and pieces here and there, and while I talk about what I do I rarely share stories of my work or what I do or what I’m working on.  There are a few reasons for that.

First, my work is just that: my work.  It is the intellectual property of the company for whom I work.  It is also very rewarding and difficult work at times but it’s also what I enjoy doing.  Is it music?  Well . . . of course not, but that’s not something I can make a living at and still raise four kids.  I went to school to be a journalist and I have been in investigative journalism for more than two decades.

Okay.  The curriculum Vitae now completed, you should know why I’m actually talking about my work tonight.

I have spent the last several months helping to produce a one-hour special that would combat bullying in schools.  Yes, I was that lanky, skinny, shy kid who didn’t fit in well at school.  No . . . I don’t necessarily think I was “bullied” as the term applies.  Certainly, I was socially excluded, but I came to terms with the fact that the exclusion in my youth was as much my own fault – my own lack of social graces and confidence – as it was the exclusion from activities.  Much of the time I was perfectly happy with whom I hung out with anyway.

But I digress.  After spending so long working on these stories: I interviewed the director of the movie “Bully”, a film that literally showed bullying in a Sioux City, Iowa school on a daily, hourly, minute-by-minute basis.  it shined a light on the problem that exists in schools yet many see as a “rite of passage!” It’s not.

I took a hard look at my kids from the moment we started this project.  I met a man whose son, a boy who came out and said he was gay in high school, couldn’t take the taunting, ridicule, and abuse any more and killed himself.  I met kids who felt they had no choice.  We interviewed a boy during the special who was so ashamed he couldn’t bring his eyes to meet our anchor’s while telling her all that he’d seen and heard.  I looked back at my kids and what they’re going through.

Noah was ridiculed, not long after coming back to school, by a kid who informed him, over and over again, that his life was worse than theirs because “Noah’s mom is dead and mine’s not!”  I saw him taunted until he acted out and then . . . got in trouble himself.  I questioned whether Hannah, who has – like her sister and other family members – gained some weight but grown tall . . . in the awkward years of middle school.  She was failing her classes.  She wasn’t turning in homework – just like a boy in our special.  She claimed she had no problems with kids at school, but then kids in the special said they’d never told their parents, either.

In watching all these stories and going to post-production in the special we all noticed that we saw and related to someone in this hour . . . be it our own kids or the kids we knew in school.

Bullying, my dear friends, colleagues, and readers, is no rite of passage.  The wounds cut by words, violence and exclusion are painful.  The scars they create are deep.  The common complaint when we posted the trailer above was that “words aren’t bullying.  It’s not a big deal, it’s really the violence we have to be concerned with.”

I’ve met parents whose kids couldn’t see the ones that loved them because every day they were verbally tormented.  I’ve met sisters and brothers who said they had wished their love was enough to keep their brother/sister around but it wasn’t.  As adults it’s easy to say it’s no big deal, it gets better . . . but when you’re 12, 13, 17, 18, 19?  You think high school or middle school is life.  It’s your whole universe, the swirling arm of some popularity black hole and only a select few get to the center.

Feel free to comment . . . or discuss.  Don’t put down or try to intimidate others against commenting here, though.  I knew it was a problem.  I didn’t know just how bad, though, until I started just scratching the surface.