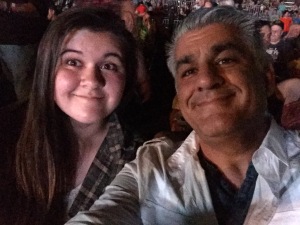 My daughter and I had always had a hot and cold relationship.  Love was the constant.  Even though she was tied to her mother’s hip, it seems, she never lacked in confidence in her Daddy.

When the teenager up there (at a ZZ Top concert, by the way, she was thoroughly surprised just how much she enjoyed herself) was a little girl she and her mother were thick as thieves.  That is…until she got hurt, had a cut, or was sick.  When that happened, she came crying (literally) to her Daddy.

This might have been from when she was an infant.  Her birth was rough, with an emergency c-section and her mother out cold for more than a day.  I actually took the baby home with me and her mother was still in the hospital.  The baby contracted RSV, while her mother recovered from a post-op infection.  So I would wake up, give her an albuterol treatment, feed her, change her, go to bed, and repeat every few hours.

So when she was hurt as a little toddler or little kid she came to her daddy.

Then immediately went back to her Mom when she felt better, hugged her, and told her mom thank-you.  Sometimes she’d even stick her tongue out when I jokingly said “hey!”

Still . . . I worried a lot about this little girl when her mother passed.  So the fact she talks with me nearly every night, kisses me good-night, and is closer to her dad then ever . . . that’s a kind of paradigm shift, one that would have been hard fought before.

But only recently have I seen her worry about me.  A lot.  When I started working out harder she wanted to make sure I did it right, not because I’m obsessed with my weight but because I need to get healthier, lose some of that bad weight in the stomach that can cause heart problems.

So every other night she’s met me in the front of the house and worked out with me.  She’s taken exercises from PE classes, asked her teachers, and put a nice little regimen of core exercises together.  She does them too, for sure, but she makes sure her old man does it and isn’t injured.

It would be easy, I suppose, to be embarrassed or indignant that your daughter is telling you what to do.  I don’t look at it that way.  My daughter is looking at me and thinking that if I am wanting to be healthy she can, too.  We do it to the degree we need…and move on.  We aren’t starving ourselves and we’re not trying to be body builders.

The small eye-rolling moments still happen.  When I goof off during warm up.  When I say “No…not 21 Pilots…we work out to Led Zeppelin” but she tolerates those because she likes doing it with me.  Or she’s worried.  Or both.  Either way, I take the win.

So when I look at this teenager in the room with me now I realize that things are a lot different than they used to be, but that’s not a bad thing.

Different is good when it gets you even closer to kids who just a few years before . . . would never have admitted they wanted to be that close to their dad.