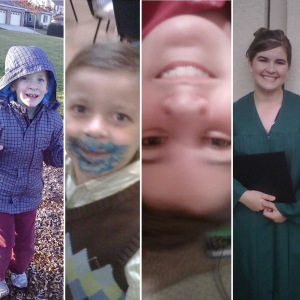 Ever found something you didn’t even remember you’d lost? That was what happened to me the other day.  It wasn’t a watch or piece of jewelry or a favorite shirt or lucky penny or anything like that.

It was a camera card.

You know, those SD cards that you put in your camera?  In the old days you had film, negatives, prints, those all took up space and you might forget them but they were hard to ignore.  These . . . well, these were easy to lose and ignore they are the size of a postage stamp.

I found this card strictly by accident, I was looking for something completely different in my office.  I didn’t even know it was there, but having seen it on the top of a shelf I put it into my computer and there it was.

A series of photos, apparently taken by myself and my children, a combination of both for sure, that had tiny little twin boys and a pre-teen middle girl and my oldest…graduating 8th grade.

It’s interesting to see the differences in the kids.

The boys, certainly, have the happy ignorance of youth.  The girls have that giddy smile of transition that you get when you’re not old enough to care about the homecoming dance or who’s dating whom or whether you look good enough in that outfit.  (Okay, the oldest did, but the drama didn’t come until much later)

The hollowness of grief isn’t visible here, either.  That’s not to say that they bear some major burden or massive weight on their shoulders, that’s not true.  They don’t look that way today.  No…what they show here is the lack of instant and quick maturity and age that they developed in a matter of weeks or months after they lost their mother.  The smiles are carefree and sincere and without hesitation.

A couple things are evident to me from this.  The carefree smiles are back.  It took . . . whew . . . more than a few years to get here.  It took stability and knowing things are okay and that I’ve not completely screwed up to do it.  My daughter still asks when I get paid and if we’re okay financially, though, which is a throwback to when we were struggling.  That’s when their mother was alive, not after she passed away.

The other noticeable thing that saddened me a bit was what was missing from the photos.  Even if the kids had taken them two people are nonexistent: me and their mother.  I kind of understand why I’m not there, I was probably taking some of the pictures.  Their mother, though, hated her photo being taken.  I like to believe that if she’d known finding this card with her on it would have given me and her kids some pleasurable smiles she’d have allowed the pictures, though.

This has been the case with so many of the memories we find buried in boxes or on shelves…the real moments, the ones where kids are covered in frosting or taking a bath in the sink or running in the cold air . . . those are missing her.  It’s a sad reality that we don’t have her in there . . . the ones we do have are the sort of portraiture and staged photos.  Yet the ones we love – even from those sessions – are the outtakes where we all are smiling, laughing or being silly.

Still . . . it’s nice to see those smiles and realize just how far we’ve come.  Maybe that’s why fate put that card just where I could find it in the first place.