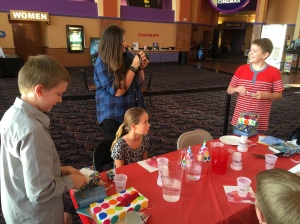 It could easily have been a stressful and exhausting weekend.

My sons turn twelve this week, twin boys with dissimilar tastes and lots of bright ideas for birthday presents and no real clue how much the things might cost. Still, they’ve never complained if they know the gift they want is too much and this year they didn’t really ask for much.

I learned, after years of attempting to do birthday parties at home, that it’s cheaper, easier and cleaner to do the party at a place that handles the cleanup for you. So this year we went to the local movie theater.

It wasn’t a complicated movie. No superheros, no explosions. (Well, a couple). We saw the movie “Home”. It was cute, if a bit vanilla at times, but it did the job quite well.

Where I’d normally make a cake from scratch I ran out of time so a local bakery substituted just fine, thank you. Salted caramel chocolate cake is a great substitute for Dad’s Devil’s Food one. Plus it looked nicer.

We ate pizza, opened presents, had cake, sang “Happy Birthday” and walked off to home and play the videogames they’d gotten as presents.

The day after was the interesting one.

While the boys went to a friend’s house, after their party, my middle daughter had the first practice for a band she’s been dying to put together for months.

The bass player arrived and in true teenage fashion they spent a large amount of time trying to find musical middle ground and get used to being in the same room with each other.

It might have been my greatest luck that I didn’t start playing the guitar until I was 19. By then, after being asked to join a cover band, I was itching to play. So the idea that I would spend more time talking seemed a waste of time. “Stop with the words, grab your guitars and let’s rock!” At least, that’s what my memory says. In reality it probably wasn’t too different from my daughter’s day.

But when dinner time came I looked at my daughter and said “can I give you some advice?”
She rolled her eyes and in typical teenage style used one word, dripping in disdain and sarcasm: “what?!”

I was stunned, a bit taken aback.

“I was just going to say . . . I heard you both saying you didn’t know how to play the songs the other wanted. You have it a lot easier. In my day we had to find the songs on the radio if they just happened to play them and record them on a cassette tape.  That was always hard. We’d trade mix tapes and hope for the best.”
She looked at me like I’d just given birth to a cat or something.
“I thought you were going to say we did something wrong.”
It was my turn for a stunned look.
“No . . . I was trying to help. So today, you have it so easy. Get a Spotify playlist together and share them with each other. Rather than learning from tape you can just go online.”

My daughter was afraid I was going to criticize her . . . but it wasn’t at all on my mind. It actually concerned me that he thought I was going to go straight to criticism. I was worried she thinks that’s all I do.

“No…but the Spotify thing . . . that’s a GREAT idea!”
“Yeah, we even played with the recordings and then came up with our own arrangements.”

Once in awhile the little people realize that there’s value in what their Dad says when it comes to past experiences.

I need to do a better job, I realized, of expressing that so they don’t immediately think I’m going to criticize what they do.