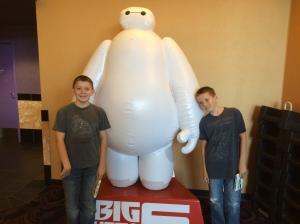 They Can Still Surprise You

I had a week of very late evenings.  That’s just the nature of television news and ratings periods and the job I have.  I call it the karmic payment for the fact that I have flexibility to go pick up my kids if they’re sick or need to go to the doctor.

Tonight was no exception.  I got home about 10:30pm and was preparing to do the routine . . . late as it was . . . of getting tomorrow ready for the kids.  That involves making lunches and doing the rest of the dishes and getting the house ready.

Imagine my surprise when I walked in to a clean kitchen.  Not just clean…the garbage taken to the dumpster; the dishes in the dishwasher, running; the floor swept.

I looked at my middle daughter, the babysitter for the evening, and asked her if she did all this.

My son is like many in my family, he can’t sit still.  Oh…don’t get me wrong, like his sister he wants to be the center of attention in any room.  Still, he can’t sit and be quiet or not move for more than 30 seconds at a time.  That being the case I’m sure it’s more burning of nervous energy than it is most anything else.

Still…on my way up the stairs to ready myself for bed I kissed one son, who said “goodnight, Dad” and then another . . . who informed me he made lunches.

He also cleared out the garbage in the bathrooms and picked up the living room.  His sister did her homework and the turntable – newly repaired – was set up with her new record on it.

I gave my son a rub on the head, hugged him, and thanked him for all the hard work.  I informed his sister, having cooked for the last four nights, that I was allowing her to go with her friends to a comic book convention this weekend.  She beamed.

Before I went to bed my daughter wanted to show me a new guitar line she’d written.
“There are lyrics…I just haven’t written them down so I don’t remember them yet.”

By the time I headed up to change into pajamas and get into bed I realized…I felt a little like I’d skipped out this evening.  There was work I normally did and it was already done…not by me.  I smiled as I realized my kids are getting bigger and more self-sufficient.

Now…I realize the sandwiches were Uncrustables and the cookies were Girl Scout Cookies…but the thought and the idea was there.  That’s the point.

Tired as I was…I wasn’t going to complain about one small transgression…they deserved some treats for once.  Particularly given that they surprised me by doing so much just while I was away from the house.

Kids have far more of a grasp of what stress and difficulties you’re under than you realize…that was the lesson I took from this…and rather than react they jumped in and helped.  That…that is what’s so amazing.

One thought on “They Can Still Surprise You”