When Failure Finds You

When is the last time your kid failed at something?

I ask this because I’ve run into more and more parents, read articles online, and talked with enough people to see that failure, apparently, is not an option for many people.  You can take this mentality to any number of degrees, by the way.  You can never fail in parenting, it will ruin your kids!  Your kids cannot fail that exam, they won’t get into an ivy league college!  You can never let your kids fail in sports they’ll be an outcast!

I have seen failure, particularly in my own home.  Not just from the kids, I’ve had my share of spectacular incidents as well.  I made dinners that were spectacularly bad.

One of my twin sons was beginning to dread PE class.  It wasn’t because he wasn’t physically fit – although he could run around a bit more and play video games a lot less.  It was because they were playing football. 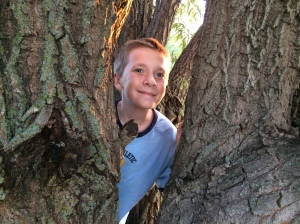 My son doesn’t like football.  I know, by the way, the irony there.  I grew up in the Midwest.  Cornhusker football is practically a religion.  I watched NFL games with my Dad every Sunday.  My son, however, simply had no desire.

That doesn’t mean we didn’t throw the football around at the park.  We do that an awful lot.  Still, unlike many Dads at that same park, I’m not training either boy with down-and-out patterns nor am I teaching them the nickel defense or the famous Osborne quarterback option play.  We simply toss it around.  It’s hard enough as this same son spends more time screwing around than learning to catch the ball.

My son knew this was going to be hard.  I offered, too, to teach him better football skills.  I offered to explain the rules, the number of downs, how to cover someone.  He had no desire.  The result, then, was that he was the proverbial last kid picked.  He had no skill other than catching the ball here and there.  His classmates made fun of him and it was hard on him . . .every. . . single . . . day.

I could easily have forced him to learn.  The problem with that is…he wouldn’t have learned.  He tunes it out.  He sits on the ground.  The way to learn . . . is to fail.

A funny thing started to happen.  As much as he hated that the other kids set him up so he would get penalties or play incorrectly and end up in from of the teacher, he realized that he needed to learn the game, too.  Suddenly, one Sunday, when the Huskers were playing, the completely non-athletic kid was sitting next to me asking questions.  We watched the whole game.  He asked to play Madden NFL on the X-Box.  He watched the Chiefs play and be one of the only teams to beat the Patriots this year.

He still has no desire – none, nada, zilch zip, goose egg (get the point?) – to play football regularly.  But he does like to play it if he’s included.  The difference, we both learned, was that while I enjoyed playing it – horrible at it though I was – as a kid, he doesn’t go there as his first option.  He enjoys learning about it, knows what happens, and has accepted the fact that Joe Montana he isn’t.

Sure, he’s more interested in learning about Ray Harryhausen and Laika films, which others around him find very cool (including that PE teacher).  He realizes, though, that he would never have found that he can enjoy sports, either playing them or watching them.  Maybe because he didn’t grow up where football is a religion was an issue…but really, I don’t believe he’d have been into it even if he had.

He would never have learned to try something different, though, had he not failed.  I could have intervened, pushed, angered him, forced him to learn…and he’d have been resentful, hated the game, never wanted to play or see a football again. 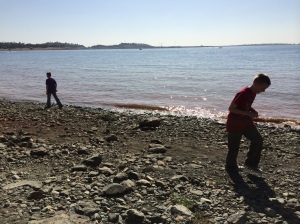 Too many of us want to protect our kids from every scrape, scratch, danger, or adventure.  I know my kids have had them, have a few tiny scars to show them . . . but that’s no big deal.  They love the fact that they get these, after they’ve healed.  They’re battle scars.  They’re trophies of their own little adventures.

They’re proof that, on their own, they’ve learned something.