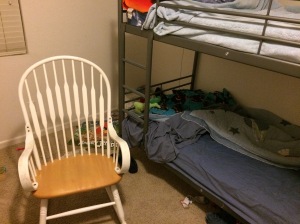 Tales of a Beat Up Rocking Chair

It was bought a couple decades ago, close to five states away.

It’s a product of its time.  The white paint in stark contrast to the natural pine finish is, without a doubt, manufactured and painted in the 1990’s.  It places the chair starkly in the mass of furniture, equipment, bottles, diaper bags and clothes that every first-parent buys.  Once the first has come and grown, you recycle those items for each successive child.

I’d have to say there’s no affinity, no tie or nostalgia for this piece of furniture.  It’s dated.  It’s not even particularly comfortable.  Until an unfortunate spat with an infestation of ants that was nearly lost by the small humans in my household just this year, the chair’s seat was covered by a big, fluffy, bright red pillow with a white and yellow daisy in the middle of it.  Alas, powerful ant killer and dead insects do not a safe combination make.

In 1994 I had wanted an antique, creaky old rocker that would have history and time and comfort seeped into the pores of the wood.  I was vetoed.  The rocking chair, you see, matched the crib.  Never get in the way of a woman decorating her first child’s bedroom.

Every Mom feels a need for a rocking chair.  The motion is natural, of course.  A baby is awake, fights sleep with all its tiny body parts, every one of them moving in complete disarray yet with the same intent…to fight Mom and Dad’s attempt to get them to bed.  I tried this rocking chair on many an occasion.  It hurt my back, hurt my butt, made noise as it ground back and forth on the floor.  It was, without a doubt, one of those pieces of furniture you used . . . because it was there.

The chair became a source of comfort.  It also became a piece of furniture that my wife used far less than I did.

When my oldest daughter was allergic to all food . . . Andrea couldn’t breast feed, the regular formula and even soy formula made the baby violently ill…I sat with her in that chair, every feeding, every night, comforting the baby whose tummy was so sour her frown made you want to cry.  At the age of two months she had to have a scope look at her intestines and stomach.  I comforted her in that chair after she would throw up what little food she could keep down her stomach.  It took a couple weeks to get a formula that worked.  I used it then to rock her to sleep.

The crib and chair continued its existence from child to child.

When my second was born, shortly after coming home, she contracted RSV.  I sat in that chair, every two hours, giving her albuterol treatments followed by a bottle and rocking her to sleep.  When she was nine and had Whooping Cough – her vaccine had waned and others around us didn’t vaccinate at all, helping spread the Pertussis epidemic –  I would rock her to sleep in the same chair.

When the twins were born, I gave their mother a break from feeding them and held them together, in the chair, feeding them bottles at the same time.

The chair moved from Nebraska to Texas to California.  Eventually, the crib was given away to a family member who needed it.

The chair remains, and a funny thing happened.

That antique chair I wanted, filled with history and memory…it just appeared one day.

Tonight I sat in the white chair, placed next to the boys’ bunk beds, so I could read a chapter of Harry Potter and the Goblet of Fire.  I noticed the chipped paint, dirty arms and beat up finish.  I found myself, out of sheer habit, rocking back and forth like one of them was in my arms, so small I could hold them in the corner of my elbow again.

The chair has history and comfort, even though in the beginning we thought it was thoroughly uncomfortable.  I looked up and saw the lights of two sets of eyes, looking through the rungs of the bunk beds and I slowly began to rock back and forth, like so many times before.

“Mayhem at the Ministry…”