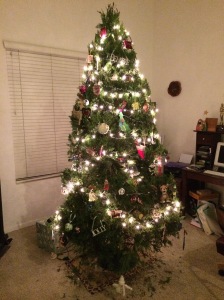 There are a million things happen after the change from year to year.  It’s not as though you wake up on January 1st and suddenly there’s a 2015 fairy floating around your head granting wishes and steering you in the direction you need to go.  In reality, it was a Thursday.  It was like any other Thursday, too, except we were all a bit tired from staying up too late and the stores were all closed so we had to do without several of the snacks that I forgot to buy the day prior.

There are, though, things that happen that make you see and feel the changes as they come.

The biggest is the clearout.  The annual weekend after the new year take down of all the Christmas decorations.  We, you see, have a vast array of decorations that I put up every year.  When we first moved, just nine months after my wife passed away, the decorations were filled with Andrea’s touches.  There were leopard spotted bows and velvet stockings and monogrammed pieces that were scattered throughout the house.

This year, though, more than most, this was our Christmas.  In fact, it was mine as much as ours.  I bought new ornaments.  I moved a tree to the living room so that we had Christmas decorations right where we spent most of our time.  Presents were under the live tree and I had an old artificial we’d had for years decorated just so it looked bigger, more festive, and just fun.

But the clearout is an annual thing . . . the lights come down, and my son – who’s deathly afraid of heights – asked to come up on the roof and help me remove them.  I obliged.  Within a few my oldest daughter, home from college, came out to help as well.

The next step, though, was shopping for a white dress for a sorority event my daughter needed.  You might think this is no big deal, go out, spend a day being driven mad by the hordes of shoppers at the mall and leave.

Reality, though, is that a white dress – just white, devoid of other colors, bright, pure, simple . . . that’s an impossible task.  Everything had spots, dots, stripes, prints and other types of things that made it a violation for said sorority.  We found, after two days and walking near 3 miles, one dress.  We found lots of other clothes said oldest child loved, but didn’t work for the project. “You’re a better man than I am,” said her uncle.

We also had to remove the tree so the Boy Scouts could pick it up and recycle it for us.

The Sunday routine finished I looked at same daughter and asked “any thoughts on dinner tonight,” realizing as soon as the words left my mouth it was a mistake.
“Umm…not really.  I don’t know.”

That, you see, is the normal response from two girls and twin boys.  “I don’t know.”

In the end I made spaghetti.  I decided.  I’m the decider “he said in his best George W. Bush voice”

But the reality is I have been for a long time.  Still…help exists.  And it helped immensely during the cleanout.

One thought on “The Clearout”