A Particular Set of Skills

I have amassed a particular set of skills . . . skills I have attained over a long period of time that make me a nightmare for someone like you.

Okay, I’m no Liam Neeson, nor are my hands categorized as deadly weapons.  I have, though, amassed a myriad of skills that I thought I would never have.  Sure, I cook.  I cooked before I ever met my wife, though.  There were days, bored in my college apartment that I would go into the kitchen and make a bunch of oatmeal-butterscotch cookies.  Why?  Because I wanted them.  When it was a band mate’s birthday I baked them a chocolate cake.  I do mean a homemade, from scratch, cocoa powder with brown sugar and homemade frosting kind of cake.

There are some skills, though I didn’t inherit and had to learn.

Laundry was the first.  I tried before, lord knows.  Every time I tried to do a load of laundry, though – hell even when I just was moving it from washer to dryer – I ruined something.  There were expensive dress pants of my wife’s that became shorts for my daughter . . . they shrank that much.  After Andrea (my late wife) passed away it didn’t get better at first.  In fact, I gave some shirts and other things to my little niece because my oldest daughter’s sweaters ended up in the dryer.  Wool doesn’t handle that well.

Slowly, though, I managed to get through the ridiculousness of my mistakes and I tend to run the washing machine every other day.  Repetition, I suppose, was the key.  So was stopping the stupid mistakes and reading labels in the clothes. 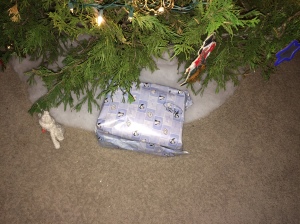 I, however, used to have that very kind of terrible wrapping job.  I didn’t really choose to improve because my wife was so amazing at decoration that I couldn’t really find a need to do it.  She was pretty amazing in her ideas so I left wrapping to her . . . except for my presents to her.

But over the last few years, after watching the people at Nordstrom’s and on TV wrapping I learned.  A lot.

So this evening, as I wrapped my first present my middle daughter watched me break out the paper and wrap.
“Wow, you’re really good at this,” was her surprised response.
“I’ve been doing it awhile.”
“No, like really good,” she informs me.

It’s here I wrinkle the paper, curse under my breath and start over.

“Well, I would have kept it that way,” she informs me, trying to be nice.

She was a bit disappointed that this was a present for a friend and not one of theirs.  I relegated their wrapping to later in the week.  I still have presents to buy.

But the Christmas wrapping . . . that gave me an indication of the things I never thought I’d learn, let alone have to accomplish.  Wrapping presents, choosing paper, matching decorations and all were things that I’d never attempted.  It’s not that I don’t enjoy them, I’d never had to venture into those brambles along the path.

It’s a particular set of skills . . . skills, it turns out, that were anything but a nightmare to learn.