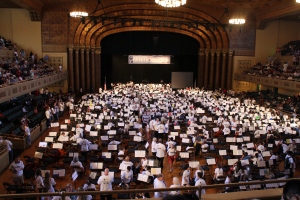 A Sense of Community

No . . . this isn’t some “it takes a village” line to talk about raising my children.

I will extol, though, the virtues of music to young people, particularly those my kids’ ages.

I don’t care if it’s playing Dvorak or Beethoven or if you’re Rockin’ the Casbah with the Clash.  Music has a rhythm and sense of movement that help your brain do so many things.  More than anything else, though, music brings people together.  Musicians are a community in and of themselves, be it the Blues musicians in the Delta area of Mississippi or the symphonic players in the orchestra for the Boston Pops.  It’s music and it brings people together.

When I heard about the Youth Symphony in Sacramento trying to build on that image – that music and its musicians are a community – I immediately thought it was worth a news story.

Then I thought it was something my kids should experience.

The Youth Symphony’s conductor, Michael Neumann, had a dream after studying an old score, that it would be something amazing to have 1,000 musicians of all shapes, sizes, caliber and the like play together.

So they did it today.  (I write this on Sunday Evening.)

After two years’ preparation, they got a thousand people together to play a handful of pieces – roughly an hour’s worth.  The idea was twofold – bring people who wanted to play together and to show the community that this was something worth pursuing.

The key idea here was that people could do this . . . they got the professionals, the intermediate players, and the beginners.  They had several 4-year-olds, an 80-something-year-old and a young man who was blind but learned two of the pieces anyway.  There were people who hadn’t played in 40 years and people who’d been playing forever.

Until today, none of them had met before.  None of them had played together.  They all downloaded the music and rehearsed at home.  Then they showed up, spent an hour rehearsing with Neumann . . . and then played.

I brought my kids, after having previewed the day in the news, and the orchestra filled the entire floor of the Memorial Auditorium.  So many people in so much space they needed a massive monitor to show the conductor. 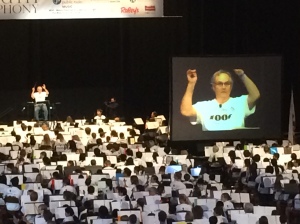 Even when the musicians, all at once, began to tune to the “concert ‘A'”, you could feel the note, physically, vibrate to the very core of your bones.  They hadn’t even played a piece yet and something magical began to happen.  As Pete Townshend put it . . . “once was a note, pure and easy, playing so free like breath rippling by.”  It was a massive breath, wafting past us. 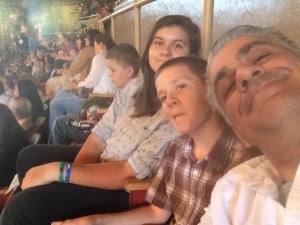 My kids weren’t overly thrilled with the fact that they were being dragged to something symphonic in nature.  However . . . once the music began . . . this became something far different than a day at the symphony.  This was witnessing and being a part of something never done before.  While the gallery and the seats were filled with a number of nervous, stressed-out, anxious parents the majority of the auditorium seats and the orchestra “pit” (and I use that term very loosely) was filled with smiling, giddy, anticipatory looks.  The audience listened to the obligatory introductory statements that come with events like these and many were on the edge of their seats as the first anthems came.

The highlight, though, was the show’s last pieces . . . where the entire 1,000 people played the “Hallelujah Chorus” and closed with Beethoven’s “Ode to Joy.”  The latter, as Michael Neumann extolled, being – in his opinion – possibly the greatest symphony ever written in human history.

When my children, though bored with certain sections, heard the Chorus and the Ode . . . they stood, as with the rest of the audience, and cheered.

The point here was not perfection, and that was certainly not the case.  Some sections had a hard time keeping time and some notes were a bit off.  But that gets lost when the one missed note is joined by 999 others rippling by.

We stood and left the communion of musicians and knew that we’d witnessed something special.

It isn’t the pursuit of perfection that binds musicians and people.  It’s the sense of community that music – something we all have in our heads and hearts – instills in us.