There Are No “Super Parents”

I’ve seen them walking around the campus of my boys’ middle school . . . like wild animals, stalking their prey.

They are the Dad, dressed in a workout shirt and sunglasses on the back of his head . . . or in his power suit, heels clacking on the pavement.
They are the Mom, with four to six-inch heels, makeup done perfectly, hair coiffed, perfume wafting through the air.

They are vigilant, looking from place to place, waiting to spot the weak of the herd.  They guffaw or cackle loudly from a corner, always looking out of the corner of their eye.  They are at every fundraiser and every booster club event and dominate the time at the PTA meetings.  Some argue against Common Core while asking the teachers how there can be any possible way their child is failing the classes . . . it must be the establishment that is failing their children!  They loudly proclaim these things while spying yours truly, weak and exhausted, out of the corner of their eye, extolling their perfection in front of the room for all to see.

I, if you haven’t figured it out, am that weak member of the herd.

Though I’d like to point out, exaggerated as my description may be, that I am not weak and they are, by no means, strong.

When I lost my wife in 2011 I wanted desperately to keep the routine, methods and activities exactly the same as they had been when my wife was alive.  Bearing in mind that while doing that I had one daughter in Volleyball (or was it basketball?) practice; I had another taking guitar lessons; I had a son who was in choir.

I had a new job and no second parent.  I started out keeping my oldest in private school and the rest in private elementary school.  By the school-year’s end I was beyond exhausted and I’d relied on my oldest daughter to drive the kids to and from what they needed and she was a teenager.  Exhaustion and moodiness and anger were part and parcel with her life due to hormones, age and grief.  She would drop my daughter off at lessons and I’d race from work to pick her up on the way home.

So I came to a few major decisions at that point, mainly from spying the hypocrisy in the people around me.

There are no “super parents.”  There are parents who want you to think they have it all figured out.  I do a ton of stuff, work a full-time job and still am making it up as I go.  I was doing that even when I had a second parent with me.

Then roughly three years ago I realized that, rather than paying for more lessons . . . my kids benefited from the fact that their music teacher was a studio musician, playing with Madonna, Bowie, Vaughan and just about every ’80s record recorded.  I eliminated the lessons and a trip across town.

My sons didn’t want  to do basketball any more.  My son wanted to do choir and he could go to an after-school program.  It was a solution to a problem.

But I wasn’t one to put on airs about what I was doing.  I needed help and unashamedly asked family friends or relatives to pick up my son when I was 2 hours away from school if he was sick.  I had days off and wouldn’t come in work clothes, I had a Hendrix t-shirt and jeans with paint-splattered Converse shoes.

I have said before, I don’t make homemade meals or treats because I want to be better than others.  I do it because a) my kids go bat-s**t crazy when they eat bought desserts in their lunch and b) they needed a stable routine . . . which included my making dinner and lunches and all that.  It was the least I could do.

But stability came with a cost: no more activities that stretched us so thin we went nuts.  I don’t attend the PTA meetings unless I need to and I don’t spend time at the school when I’m not needed there.  The teachers don’t need me butting in and the administration doesn’t need me telling them they’re right/wrong/mean/nice/nasty/pleasant on a daily basis.  When they are wrong I’m there, angry Dad, advocating for my kids.  When they’re right, I compliment them and thank them for the great job they do with my kids. 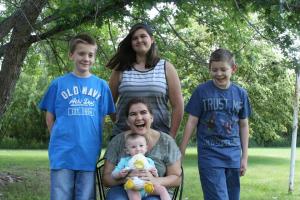 I realized very early on that my being home, stable and comfortable with them and giving them support was far more important than being their taxi driver.  I also saw them get more comfortable with the fact that they have only one parent and it’s okay to have that.  Rather than wound up tight as a drum and ready to snap – while putting on a picture of sophistication and perfection – they saw that what activities they weren’t doing we made up for in time spent together.

Most of all, they realized that we’re stronger together than when we’re apart.

That’s good, too, because sometimes when you’re the weaker of the herd you need the rest of them to protect you from the wild animals prowling around you.