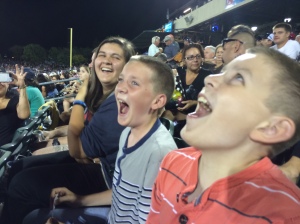 It’s not often I can use one word, but this was a day that deserves it.

I ended up having to work late.  Not that it’s a particularly uncommon event in my household for me to say “Dad has to work late,” but usually I know enough in advance, with my position, to make arrangements for that.

“Arrangements” means that I normally get some food in a crock pot or pre-cooked so all my middle daughter and two sons have to do is heat it up and eat.  This is what I was unable to do today.

So given that I had a cell phone and so did my daughter I texted her and asked if she thought she could make something.  We had spaghetti sauce, fettuccine noodles and the like.  So she said she’d make pasta and get the boys ready.  When a couple hours turned into many hours that also pushed it to bedtime.

“Tell the boys it’s time to shower,” I told my daughter via text.
“Already done, one is showered, other just got in.”
I smiled, taken a bit aback and happy things were going well.

An hour later it was bedtime.

I grabbed my phone and texted my kids “goodnight.”
Then I realized that my phone upgrade had the ability to send an audio text.
“Goodnight!  Love you guys!”

I got one in return.

Exhausted, with the only food open for the night being crappy McDonald’s burgers for me . . . which I regretted 5 minutes after eating them . . . I entered the house and heard music playing from my stereo.
“Jesus just left Chicago…and he’s bound for New Orleans.”

My daughter looked up.  “Hi Daddy!”
“Hi kiddo…ZZ Top, huh?”
“Yeah, I found a tape on the stereo cabinet.”  It was a mix tape I’d made Andrea when we were still dating.  It actually still played.
“I made that for your Mom…” I said, not able to really finish the sentence.  ”
“Yeah.  I figured if you made it the good stuff you listen to would be on there.”

I smiled a little because as I walked into where she was in the kitchen she’d already made sandwiches for her and her brothers for tomorrow.
“You didn’t have to make lunches,” I told her.
“Well, I only got the sandwiches done so far.  Dishwasher is full.  Boys are in bed.”

This is the same girl who wouldn’t do dishes, wasn’t turning in homework and was having major issues 3 years ago.  I hugged her.

I put the bag with my “dinner” in it on the table and helped finish the lunches.

The evening was long and a bit exhausting but I was energized by the smile and help my daughter had given me.

It isn’t often my kids help me instead of the other way around, but I needed the little bit of boost this week.

I hugged my daughter and she went up to bed.

As I sat and ate my lukewarm hamburgers . . . I listened to Clapton sing “My love has gone behind the sun…” and smiled at the memory of her mother.