That’s been a bit of a constant in my house.  Three years on, it seems, change is the constant . . . which sounds like such and oxymoron it shouldn’t really be.  But the one continually consistent state of being in my house is change.

2011 saw the largest amount of change.  My children and I saw my wife, Andrea, pass away and leave our daily lives.  As a result of losing a second income, we lost our home.  I was forced to leave my job.  We moved to a rental home – a nice one, not bad at all.  My oldest daughter had to change to the public high school.

Then came last year . . . my oldest daughter went off to college.  Her twin brothers had to move schools so they’d be on the bus route home.  My oldest, you see, had picked up the kids from school every day.  That’s not an option when she’s no longer home.  My twin boys now saw themselves moving to a new school for 5th grade . . . and 5th grade alone.

That could have been catastrophic for just about anyone.  Instead, my sons have thrived.  Their older sister – my middle (yep, I have 4 kids!) – started high school.  Again . . . she found her element.

Now comes this school year.  My sons move – yet again – to another school.  This time it’s because of the move to Middle School, but still, it’s another change.  The boys have been excited about starting this school, one of the twins, who is still having a hard time adjusting, seems to hope that the larger school, broader scope of personalities and children, will help him find a niche and group he can relate to.  I hope so, too.

But we’ve weathered so much over the last few years, without sounding too confident here, I think they’ll be okay.  Certainly, there’s nothing worse than losing your parent – unless it’s losing your brother, sister or spouse, I suppose – so changing schools can’t be too high up on the difficulty scale for them.  It’s stressful and it’s a totally different kind of stress than grief can bring.  I certainly know and realize that.  But to see the change coming and prepare them for it is the biggest thing.

Three years ago the change was abrupt when they had to see our family shift from two parents to one.  Someone asked me once what would happen in the future for them.  I told them I had to take it a day at a time.  It’s also true that I’m their Dad and they are my kids.  No matter what happens . . . if I stay single, if I fall in love again, even if I get married . . . they are my kids.  Nobody else’s.  They won’t have another Mom, either, that will always be Andrea.  No secret there.  With the boys being 11, their sisters 15 and 19 . . . that won’t change, either.

So what do you do with the change?  You weather it.  Sure . . . I have more white in my hair than most 43-year-olds, I suppose.  But I’ve had grey hair since I was 25.  Sure, I’m a bit more weathered, but that’s also experience.  I also feel like, hard as the last three years have been, I value time, experience and . . . life.  It’s just too short.  Sure, there are lazy days where we sit around the house, but I also see the value of jumping in the car and heading to the first place we see that looks interesting.  Might be San Francisco and it might be Capitola.  It might be Reno or it might be travelling to the Trinity site in Los Alamos.

But change has one constant itself . . . it’s never boring, nor are our lives.  Change, breaking down the walls of silence and lifting shadows from your mind (had to borrow from the song up there).

We have to weather the change, but it still tempers us into stronger people.  I see the strength in all of us.  So we brace, press forward, and shove our shoulders into the winds of change. 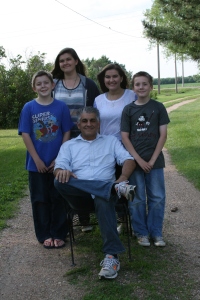 Dave Manoucheri is a writer, journalist and musician based in Sacramento, California.  He’s chronicled the life of he and his four children since his wife’s passing in 2011.  Laughter, tears and much music fill their lives and this blog, named after a saying among the family pictures on their wall: Our Story Begins.  You can follow him on Twitter @InvProducerMan or on Facebook.