Full of Sound and Fury

I had a couple meetings in New York for a project I’m putting together and my oldest daughter, for lack of a better word, is the researcher for the project.  She’s getting paid, though the dry material, which includes testimony from Congress in 1985, is not the easiest material to digest.  But she’s my daughter, and like it or not, she inherited my genetics and some of my brain.  She’s stuck with it.

But as much as I needed the meetings – and I did – my daughter had done a tremendous amount of work, babysitting, helping and just adjusting over the last few years.  So as a result she got to come along with me on the trip and I made it a big deal

No.  We didn’t spend ten tons of money on shopping on 5th Avenue.  I got small gifts for the other three at FAO Schwartz and we had dinner at a couple hole-in-the-wall burger joints and lunch at a place that was absolutely amazing.  None of it was insanely expensive.

But the other thing was the opportunity to walk around, with my oldest daughter, just like when she was a little kid again.

Some of it was just like when she was little.  The “whoa!” and “that’s so cooool!” that came out occasionally showed me the tiny little girl that used to have pig tails and sang whatever song came to her head on a regular basis.  Much of it, though, was the reminder that, however much you want your children to be little kids forever, she’s an adult.  She grew self-conscious of the clothes she was wearing and commented that everyone in New York was dressed up and looked great.  She wasn’t asking for new clothes, just bemoaning the choice of clothes she brought with her.

Then came the occasional moodiness that I saw in her mother.  Hurt feet.  Walking through Central Park. 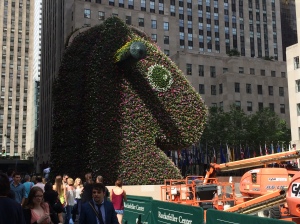 But the adventurous kid was there.  When my friend told me we should go to Rockefeller Center because some strange combination of Dinsoaur or Horse . . . a Dogasaur…or a Dinohorse . . . was installed there we had to go. 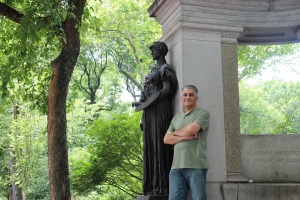 She snapped a picture of me in Central Park, particularly since I had so many of her all over the city.

Essentially, this was as much a trip where we walked around a city that she has grown to love, though visited only twice, like we were veterans.  People stopped us on the street asking directions and we knew where they were wanting to go.  We didn’t eat at the normal places, we wanted to find the little, non-tourist places.  (Okay,we ate breakfast at Panera on Saturday, sue me.)  We went to things that neither of us would have done when we were little . . . and there were things that none of the other three kids would have done, either.  Particularly the Museum of Modern Art. 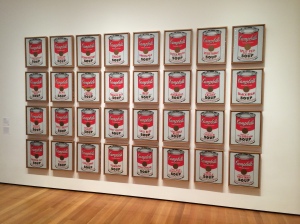 Not often you see an installation with the actual Warhol paintings . . . even if you aren’t a Warhol fan.

Perhaps the greatest moment, though, was walking into the Park Avenue Armory and seeing Kenneth Branagh perform Macbeth.  My daughter is a Shakespeare nut . . . so it was a no-brainer to take her to see a play performed by perhaps one of the greatest interpreters of the Bard’s work in the modern era.

But nothing prepared us for what we saw . . . the entire interior of the building transformed into a Scottish Loch, the audience separated into Scottish clans.  The battles were fought as rain fell in the middle of the room.  It was, perhaps, one of the greatest performances I have ever seen.  Bar none.

To steal from the man . . . it was a weekend full of sound and fury.  There was no tale, no idiot telling it (except for your author here) and in the end it was what I have preached for the last three years.

This was . . . an adventure.  We bounded around the city, enjoyed ourselves, diets and exercise be damned . . . we walked 5 miles anyway.  We stayed at a hotel in Chinatown.  We rode the subway like natives.

This . . . this was a wonderful opportunity to get work accomplished and show my daughter my appreciation of both the work she’s done and of the adult she’s become.

I only hope we can continue, all five of us in this household, challenging the days with equal sound and fury.