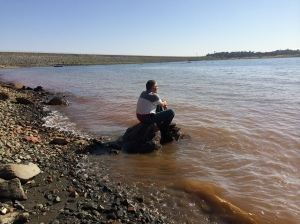 It all started at the barber shop.  Well…Sport Clips is the name of the place.  Call it what it is, no old guy with a machine that makes foaming shaving cream and a leather strap to sharpen his single-blade razor.  This is the modern take on trying to get men to do more than just get the hairs on their head trimmed. It all started at the end of the time there, though.

The kids are getting ready to visit my folks out of state while I have business meetings and a conference to attend.  That equates to them being a little stressed.  Their middle sister also had them all stressed out because she ticked off all the things that could go wrong on a trip even though they’re more likely to get struck by lightning than have anything she listed happen.  Didn’t make a difference, the damage was done.  The boys were stressed. So while their sisters went out to shop for clothes I took the boys to get a much needed trim.

When I was standing at the counter about to pay the two boys just started to slug it out.  Not push, shove, wrestling kind of slug it out but flat out punching each other: in the chest; in the arm; the face was next.

I stood between them, not even having taken my credit card out of the wallet yet. The woman behind the counter snickered.  I, however, wasn’t so benevolent. As I moved to go back the two boys started to move toward one another, arms raised.

“KNOCK IT OFF!” was the response they got from me, in full volume.

I made one boy sit up front and the other in the back as we got in the car, just because I didn’t want to end up doing the stereotypical “don’t make me pull over!” line while we were on the road.  They both started to itch and shake their shirts, hoping to remove the loose hairs floating around their bodies.

“Can we take a shower when we get home,” they queried?
I remained silent.
They got grumpy, still, even resentful. I didn’t care.

I realized that it was summer.  It was summer vacation and they’d been stuck inside the house, alone, with two girls who wanted to watch Parks and Recreation and talk about the book The Fault in Our Stars and do all the things that sicken little 11-year-old boys.

I passed our exit.
“Where are we going, Dad?”
I remained silent.
“Seriously, what are you doing?”
Stone-faced father continued to drive.

I pulled up across from the intersection by a giant levee and parked the car.  The boys followed me and we crossed the busy intersection at the light and then came, after much huffing and puffing to the intersection of a walking trail and the levee.

We walked down and spent the next hour and a half down on the shores of Folsom Lake.  We posed for pictures.  Mostly, though, we skipped stones.  One of the boys kept standing as close to the water as he could and hopping back just as the wake of a boat would make its way to overtake his shoes. 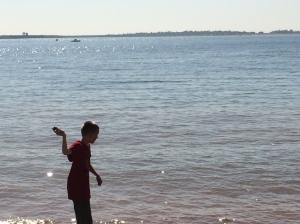 I stood, watching them.  I took some photos, yes, even posted some on social media.  But that was about five minutes of time.  The rest . . . was just me and my sons outside.  By the water.  No electronics, no depressing romantic books about someone dying.  No shopping for clothes.

It’s summer.  These are the memories we should strive for.  We got back in the car, red-faced, thirsty, tired, and both boys looked out the windows, huge smiles on their faces.  There was no thought of planes or vacations or heading out of state.  No school, no books, no game boys were on their minds, either.

I saw it, peeking right there.