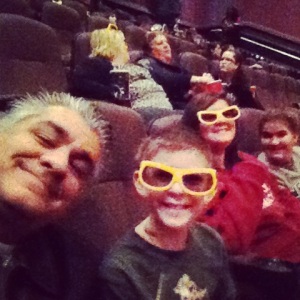 Not Living in the Past

In spite of, perhaps, a few indications to the contrary, I don’t spend my life living in the past.

Yes . . . I love blues music.  I consider that less “living in the past” and more influenced by the roots of music.  I have a love of jazz, too.  Yet . . .when we went to the record store, I bought the new album by the Black Keys and my daughter bought one by The Clash.

But it’s a bigger thing.  It would be easy, I suppose, to live in the past. Especially if something like losing your spouse happens.  You would think, in fact, given the propensity for us all to think that you search for and find “the one,” that one singular person that’s your soul mate and they’re who you love and live with forever, that the past is all you would live in.

That would be easy.

But I guess we’re just not wired that way.  I’m not sure any of us in the world really are.

The first year, I’d have to say, maybe two years, we were heavily affected by the past.  I put all the old decorations and acted in a similar fashion.  I kept looking for someone to bounce decisions off but they just weren’t there.

If you look at us now, though, you’ll see that we’re not living in the past.  We’re heavily influenced by it, for sure.  The memories don’t hurt they actually heal at this point.  We see a picture or hear a song and it’s not quite as painful as it used to be.  The foundation of our story was written with my wife and now we use that foundation.  It influences us but we don’t live there.

I have spoken with some who lose a spouse or a parent who cannot bear to let ay of this go.  There are clothes still in the closet and shrines in a bedroom or pictures that remain and they refuse to add new ones because the new pictures don’t contain the person they lost.  I understand how that’s easy to do, too.  We started that way.  We used the same home decorations and there were tons of clothes we kept when we moved.

But in the last year we saw that the clothes were dated and neither girl could wear them.  We had a virtual gaggle of chickens in the kitchen – ceramic; cast iron; masonite chickens all decorative.  I don’t even like chickens that much, but my wife had a near obsession with them for our kitchen.  When I was married I didn’t mind, it was her thing.  Now that it’s our kitchen without her, I realized I didn’t just not want them here . . . I really didn’t like them that awful much.

But I also realized that I remember fondly so many other things.  It’s not fair to say “I’ve moved on” because it’s not that.  I still have her in my heart with my fondness growing ever higher for her.  Of course, being married for years you think of your spouse every day.  The difference is I realize now I have room for more, too.

I don’t live without her.  I’ve learned to live with her not being here.  So have the kids, and when we bring her up we don’t get that foggy, depressed look, your eyes, aiming for the floor when you speak.  I see the twinkle that resided in Andrea’s eyes sparkle in theirs when they remember her.

That’s the key, too.  Not living in the past, but honoring it.