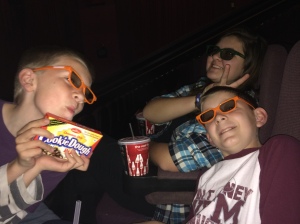 Surprise in a Ziplock Bag

It isn’t often things complete surprise me.  I have endured a lot and seen a lot and I’m more than a bit cynical, particularly if you talk to my kids.  They’ll inform you just how cynical I can be.

Like the other day . . . when my kids talked about someone getting an award that allowed them to meet the Governor and a Congressman.  They were thoroughly impressed . . . and crestfallen when I wasn’t.  I suppose it’s my job that has me less enamored with the public figures than many people.  Where they see the Governor as an authority figure I see him as a man who refuses to talk on-camera with anyone but the network news.  It’s not politics it’s just that . . . I’ve met these people.  They’re not American Gods . . . they’re people.  That took some of the mystique out of it for me.

But I digress . . . government officials don’t surprise me.  Thunderstorms, tornadoes, flooding, none of that surprises me, either.

But on a regular basis my kids have the ability to completely catch me unawares.

Then . . . there it was, on the counter, a Ziplock freezer bag – one of those giant gallon sized ones – filled with muffins.  Chocolate chip muffins, to be precise.

“Did you guys make muffins,” I asked, utter surprise on my face?
“Yeah…” was my son’s response.  “Well…Hannah did most the work, but I helped.  I saw you didn’t have any cookies or treats made for lunches and we wanted to help.”

Help they did.  Two dozen muffins, neatly removed from the pan, sugar coating the tops, were carefully placed in the bag, tops up, just sitting there.  They even waited for the muffins to cool and then put them away.

“You honestly didn’t have to do that,” I informed them, “I had planned on making something for you.”
“We know,” said my daughter, “but we didn’t want you to have to make anything.  We wanted to help.”

It’s those littlest of moments, things like this, that get me.  I spent days coated in powdered sugar for science projects.  I grumbled when the umpteenth dish that they missed was sitting on the counter above the very dishwasher they were supposed to load.  All those complaints building up melt away when they do something for no other reason than the fact they didn’t want me to work that hard.

“Do you want one of our muffins,” they asked me?

Bear in mind, I’ve been dieting, running in the morning, doing my absolute best to reduce the strain on my back and show my kids that moving around and working at being healthy is important.

But tonight, at that very moment . . . a chocolate chip muffin was the most important thing in the world.  After all, they made them so I wouldn’t have to make something myself.  The cost of eating one little muffin wasn’t the possibility of ruining our dinners.

I don’t grumble about making treats for my kids.  Beyond the fact I know what’s in them it also helps me to survive the evening.  Be it the preservatives, dyes, corn syrup or whatever, treats bought in the store drive my kids absolutely bonkers.  But when I make them it’s no impact on their systems whatsoever.

But there’s a bigger issue: my mother did it for me.  The most important thing to me, in the only ways I can, is that my kids have as good an upbringing as I did.  I cannot do all the things my parents did for me, I am the only parent in the house and I have to work.  But I can do a few things and treats are one of them.

No . . . eating a muffin first and dinner later was the greatest thing I could do at that very moment.  It was, by the way, delicious.