Our Story Begins:
A Touch of the Blarney

You might wonder just what in the blazes a guy with the last name like “Manoucheri” would have to do with anything Irish.  The fact remains, though, rather than the Italian sound the name has and the Persian tones and the French Algerian translation of the last name . . . like most Americans, I’m a Mutt.  There’s Persian, German, Bosnian, and . . . yes, you guessed it, Irish.

But it’s not the heritage that marks my memories on a day like this.  Not at all.  In fact, it’s the memories of living in what is the Irish capital of the state where I grew up.  That always sparked a million memories.  My school, every year on St. Patrick’s Day, would go downtown in this small town and we’d watch a parade.  My Dad was in it every year, as a matter of fact.  We had our share of parade days, too.  Cold, yes on many years, but we were there.  My school had a Mulligan Stew feed every year on this day, too, and I actually have the recipe.  It was insanely delicious and probably one of the best lunches the school lunch program had.  Then there was the annual tradition of having corned beef and cabbage.  (Okay, I would forego the cabbage and go for potatoes and carrots with the corned beef, but you get the drift)

I don’t get sloppy drunk or drink green beer or put fake leprechaun tracks in the house or any of those other shenanigans.  But we do try every year to have a little something.

We didn’t do much on St. Patty’s day the year my wife, the kids’ mom passed away.  It’s not like it was a huge holiday then.  But after . . . like so many other things, I wanted the kids to have the celebrations I did growing up.  So the first year was corned beef.  Last year we had Mulligan Stew – I had the recipe.

This year . . . we spent yesterday at a jam session celebrating the day of the patron Saint Patrick. 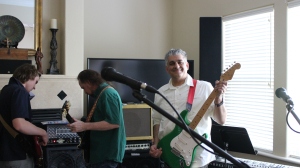 I brought the amplifier built by my brother and my beloved 7-Up Green Fender Clapton Model Stratocaster.  It’s been affectionately dubbed “Dot” thanks to my older brother.  The name fits, though.

But more than anything, I was impressed with how the kids ate the brisket and the potatoes and then my daughter joined in. 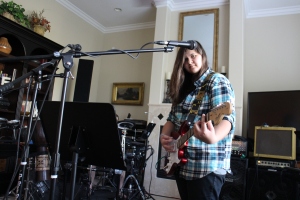 My son let her borrow his red Stratocaster and she played nearly the entire 3-4 hours we were there.  We played a couple songs of her ilk . . . she started into Get Back by the Beatles and then started the slow burn of Tom Petty’s Breakdown.

I say this out of pride, sure, but also because this is the kind of event our lives have gravitated toward.  We live through improvisation, spur of the moment enjoyment, and adventures that we might never have considered even a few years ago.   It wasn’t because of their mother, she loved life as much as anyone.  It’s because she’s gone that we embrace the change, the life, the adventure in everything.  For hours we played and ventured into Suite Georgia Brown and my daughter struggled her way through Lay Down Sally realizing that if you play on-key and with authority you look like you belong there.

And in the end it’s the adventure that has helped us get through.

Sometimes all you need is a touch of Blarney . . . and the Irish in you peeks on through.  Now I must be off to finish up my pint of Guiness.