I often marvel at how, as poor at planning as I am, how planning of schools, organizations, you know – all the people we trust to know what the heck is going on – tend to plan without really planning.

My frustration with this comes at the end of the week.  My two daughters, you see, are graduating.  One graduates high school itself, a major accomplishment, a touchstone of life that you set in the roadway as a mile marker in your life.  Abbi, my 18-year-old, has had a rough high school life.  At her mother’s insistence, we put her in St. Francis High School, a private, all-girls school in Sacramento.  The idea at the time was that her mother would take on some extra work from a project at one of the universities to pay for the tuition.  Since Andrea was not working 40 hours a week at the time, we’d be able to swing that.

But then Andrea never took on the extra work.  That in and of itself was hard enough.  The bigger issue came when Andrea became ill and had to go on short term disability until we could get her liver surgery finished.

Then, two years ago, Andrea passed away.

Abbi wanted to stay with her friends in the small, private school.  However, with tuition rivaling that of the out-of-state fees that some major universities charge, I was unable to make that happen.  We had to take her out and put her in the public school.  In the age of social media and constant-connection, Abbi couldn’t let that break be a clean one.  She was constantly getting texts and emails and Facebook and Twitter messages about how hard it was without her.  She saw pictures of the friends moving on without her.  Eventually – and it took an entire semester – she had to make a clean break or she was going to lose it.

Moving to a new school as a junior where people have already made their social connections and friendships is difficult at best.  Some days it was nigh impossible.  She got through the two years and it was difficult.  At the end of the day, though, moving out of the school that had so many memories and lessons from her Mom allowed Abbi to become who she wanted, not the Abbi her Mom thought she should be.  If Andrea were alive she’d be having heart failure due to the fact Abbi was going into the arts and not medicine – something that made money over happiness.

So this is a major accomplishment for Abbi, to get through four years at two different schools.  Her high school sets the date for their graduation and their ceremony time years – literally years – in advance.

So imagine my consternation when my middle daughter, Hannah, is graduating 8th grade on the exact same day.  Where I graduated on a weekend so family and friends could attend . . . my kids’ is on a Friday.  Hannah’s in the middle of the afternoon.  Abbi’s at 7pm, but you have to be there early to get a seat.  It’s back again to the planning . . . Abbi’s school had their date set for more than a year.  Still…Hannah’s set theirs the exact…same…day.  Now instead of attending one and then the other – so that their families and even Andrea’s mom, who is very ill, can go to both – now they have to choose. 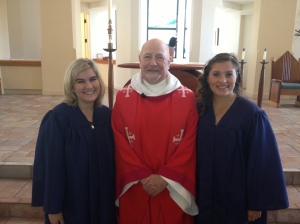 I understand you can’t settle every date and make everyone happy.  But now I have to scramble to run from graduation to graduation.  My 8th grade grad?  I had a mass at the Catholic school I attended.  We had a few people over and then we ate dinner and I went to bed.  Hannah’s?  It’s an event with a photo booth and seating charts.  It’s more involved than her sister’s – which is an actual high school graduation.

I felt bad when I had to tell Hannah she couldn’t go to the dinner/celebration/event because – and this sounds cold, I know – it’s simply and 8th grade graduation.  I wasn’t going to ignore her sister’s 12 year accomplishment to celebrate Hannah going from awkward teenage years in middle school to . . . more awkward teenage years in high school.  I honestly remember very little of my middle school years.  I do remember a lot about high school.

So double trouble has hit.  We’re celebrating both kids – at our home – after the second one graduates that evening.  In the end, it’s probably best anyway.

What and who matter most are our family . . . and we’re stronger together than when we’re apart.  And we’ll all be there.