The question comes up every once in awhile, not as often as it used to, but it does come up.  Usually with people who knew us as a family, two parents, four kids, the typical family.  They see us going along, happy, even though Andrea, my wife, passed away two years ago, and they pose an interrogative that they think is heartfelt.

It usually starts with “you guys are doing so well,” or “it must be so hard,” or “I can’t handle my kids with my wife/husband, I can only imagine!”  While I appreciate the sympathy or pity or whatever they intend with that statement, there usually is a small part of me that wants with all my might to ask “what the hell was I supposed to do, shut down and let the kids fend for themselves?”

But the question that once in awhile involves asking what I’d do if I had Andrea back.  Often it’s more a statement than a question, like “you’d give it all up to have Andrea come back, wouldn’t you?!”  Sometimes it’s the “she’s waiting for you,” others it’s “do you ever think about what would happen if she came back?”

I used to think this was a phenomenon left just to the widowed.  I guess I was wrong when I had a discussion with my daughter the other night and she’s had the same thing come to pass.

The funniest thing is usually the reaction when we both give the answer: “no.”

That’s not an angry statement, by the way.  I’m not drowning in the tears of my own despair.  I have let go the anger and the guilt and the resentment.  This isn’t because she left and I feel bad that I survived nor is it a feeling of rage over taking care of the kids myself.  I knew I had to do that.  I knew this wouldn’t be easy, too, but there are a few things that need to come out, I guess.

Here’s the thing: if she came back tomorrow, acting like nothing happened, ghost, zombie, whatever, we’d look at her and ask “where the hell have you been?!” 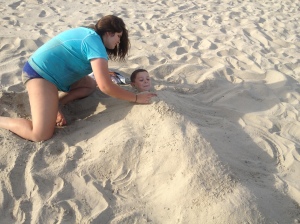 The other, biggest thing, is that we all – all five of us in this house – have changed.  We changed a lot.  Pieces of my life that were missing, the abilities I needed to bolster my wife used to fill.  After she left, almost immediately, I had to fill those myself.  I did it, and my life had been better.  She gave me those tools, I know it.  She gave me confidence and I still have it.

The corollary to the “wouldn’t it be great” question is usually “you’ll probably look for somebody just like her when you’re ready!”

The answer shouldn’t surprise you.

No…I won’t.  It’s funny, but even though people talk about how hard it is to change, I’ve done it.  Sure, by necessity, but I did it.  My life is different, my personality too, to a degree, while keeping the best parts of myself in there.  Sure, I still watch bad Sci-Fi with the kids.  I’m still a musician even though I could probably never hit the road and tour now.

But Andrea was a dominating personality.  Not that I’d lean toward someone who is a pushover, never would do that.  But Andrea was an almost domineering, strong personality even if she was wrong.  When we met, I needed that.  Today…today I took on some of those dominant characteristics in order to show the kids I can do this.  It isn’t an act, it’s change.  I took the best parts that the dual roles of a marriage required and did what I could to use them myself.  It’s not easy.  Many times they still wish they just had Mom here to work with them on any particular thing.

But we always get through.  We’ve become a cohesive, strong family.  It was hard for my daughter and I to come to terms with the fact that we are in a better place and it happened, in part, because she’s not here.  That’s not to say we would have wished this, not at all.

But now that we have come through so much together . . . now, it wouldn’t be great.

Because we’re finding greatness as it is.