The only thing we needed was snow.

That’s all we needed to make it the perfect holiday.

I get it, there are those of you who might tell me that perfection would have been having my late spouse here with me and the kids, and perhaps they might have said the same thing at certain points in the day.  But only at certain points.

I devoted the end of the 24th and all of the 25th to them . . . and the random pictures, texts and messages to others to wish them their happy holidays.  I didn’t blog, I didn’t write, and I didn’t take time away from them . . . until now, when everyone is in bed.  No mice stirring, just the ants who’ve somehow invaded Abbi’s bathroom and the kitchen.

I worry, sure.  I was terribly worried about this Christmas.  I over-compensated last year and bought way too much stuff with money leftover from an old retirement account and stock options.  We needed a new car, the old one dying, and the money left over from that went toward paying for all their Christmas presents.  This year I didn’t have much.  We had to pay for college applications and doctor’s bills and auto repairs.  There wasn’t much left over for presents.

Still . . . I needn’t have worried.  The kids, in their infinite wisdom – wisdom beyond their years, by the way – just didn’t ask for much.  They didn’t want much.  They really didn’t.  I had bought some presents . . . Hannah and some books for the kids . . . months ago, just hadn’t wrapped them.  We considered opening gifts late on Christmas Eve, but the kids wanted to wait.

So that night I took the boys up and all the kids sat as I read How the Grinch Stole Christmas rather than our normal book routine.

I had a tradition – only my own since my wife fell asleep every year waiting for Santa – watching Jack Lemmon in The Apartment as I prepped for the next day.  I did it again this year, just because it is comforting to me.  I didn’t feel alone, I just mapped out where the big man in the red suit would put everything.  You know, to help him out.  It was about 1:30 Christmas morning by the time I went to bed.  That, of course, led to the inevitable 5am wakeup by the kids.

But the things they got from Santa were more than they had asked and therefore more than they expected.  They played their new games all day and I didn’t stop them.  They ate too many sugary treats and I didn’t stop them.  We had cinnamon rolls for breakfast and then opened our gifts.  Where I worried I hadn’t gotten them enough . . .their favorite gifts were from their grandparents anyway.  Three of the kids’ favorite things were stocking caps.  They wore them all day long! 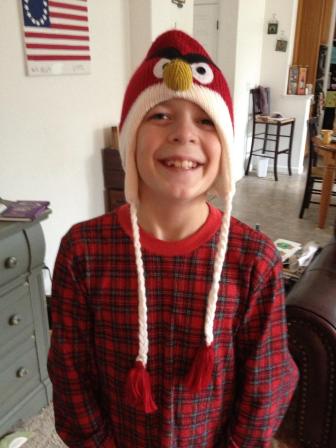 A green hat for Hannah: 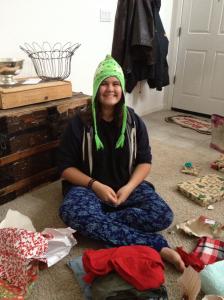 And the most successful – a sock monkey hat for Noah.

I made a Christmas dinner, a turkey, stuffing, mashed potatoes . . . everything you’d expect, I supposed.  No china or silver, but we ate in the dining room, the first time since last year, I think.  We laid out the table and even the boys ate more than they should, which is rare.  It was a great day.

At the end of the day we watched two shows recorded . . . and that we were dying to see.  The kids all went to bed and as they were going they all looked at me and said “this was the best Christmas, Daddy!”  They weren’t doing it to make me feel better nor themselves.  They truly liked their day.

And you know what . . . so did I.  It wasn’t a Christmas their Mom would have prepared or tried or even thought about.  The presents were ones I’d come up with (with some help from Abbi).

Then we got word that Abbi had been accepted to one of the schools she’d been hoping to attend.  It made her Christmas.

None of today was the kind of Christmas we’d have had two or three years ago.  Didn’t matter . . . we were really happy.  The year’s almost over, but that’s okay.  It’s really been a good year.  It’s been a good Christmas.

And now I go to bed, not with sugarplums, but my smiling kids’ faces dancing in my heads.

Merry Christmas to you all.

One thought on “A Merry Christmas Indeed”