This morning something spontaneous and amazing happened.

We burst into song. 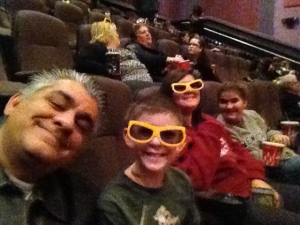 Yes, I know, I’m a musician and that shouldn’t surprise me.  I am, after all, the person who wrote in his own bio that “I see rhythm and harmony in the world.”

But that’s not always applicable to the four miniature human beings that reside with me every day.  They like music, too, they really don’t have a choice.  We pick out LP’s or CD’s and listen to music every night we have a chance to eat at the table.

I also play a little game when the radio’s on or I pick music that has any kind of history or background.  I cover up the radio, I hide the song and LP titles, and I quiz the kids on who it is.  There’s a misnomer from some out there that I only like music recorded between 1967 and 1975.  That’s not true.  I have a love of jazz, particularly Brubeck, Coltrane, early Miles Davis, all that.  Aretha, Ray Charles, even some Sinatra here and there.  Classic rock hangs in my head a lot, sure.  I have a deep and abiding respect for Eric Clapton.  I think Layla and Other Assorted Love Songs might possibly be the greatest rock album ever recorded.

But I also listen with the kids to the Black Keys.  I have Amanda Palmer’s new album.  (Okay, she was in the New York Dolls, but still, it’s new music)  The kids pick Adele and Bruno Mars along with Brian Setzer and Bonnie Raitt.  I take pride in exposing them to good music while we listen to some of the auto-tuned pop that dominates the recording industry today.

But this morning we were on the way to school and I had a CD in the car, something the kids hadn’t realized, and it started playing.

“Who is it, Hannah,” I asked.
She screwed her face up tight, looking like she might know but couldn’t figure it out.
Then the vocals started:
“I seen the bright lights of Memphis . . . “

Then Hannah, Noah, Sam and I broke into song.
“And the Commodore Hotel . . . and underneath a streetlamp, I met a Southern Belle”

More than breaking into song, I realized that the kids actually knew all the words.  Now, I get it . . . probably shouldn’t have my 9-year-olds singing “boy do I remember the strain of her refrain, and the nights we spent together, and the way she called my name…”

Still, I was singing The Joker and other songs at their age.  Still – “probably shouldn’t be singing this song at school,” was my line to them.
“Oh, we know,” Hannah says.
“Why?” asks Noah, who can’t let the question go.
“Just don’t, okay?  Most people wouldn’t understand.”

But then Hannah recounted my tale . . . how Lowell George changed the back pickup in his Stratocaster to a Telecaster one.  How he used a Craftsman socket as a slide.  How – and this is going way back – my cousin, Tom, was the only other person I’d ever heard sound exactly like Lowell George . . . with or without the slide.  I was proud.

We sang the entire way to school.  Everything from the low-down Southern whiskey to the white picket fence and boardwalk of the house at the edge of town.

My kids love the music in the car, at dinner, and the way it permeates the house.  If you wonder why I recount this tale, remember that music was still big when my wife was alive . . . but not part of our lives.  Guitars were relegated to the back room.  Music wasn’t played at dinner.  The stereo was put away.

Today, in the middle of a simple drive to school, my kids broke free, finally, of their past as well.  Belting out Dixie Chicken – an odd choice, I’ll grant you – they showed we’ve become our own strange, little family now.

Fat Man In the Bathtub by Little Feat