Two things were wrong with that.  First, it’s how I perceived the world.  I’ll be honest, and it wasn’t until many years later, that I realized it was just as much my own fault I saw things that way.  I was immature, lacking confidence, missing some of the more social graces, even.  On top of that I had a refusal to conform, no matter how harmless the conformity.  It wasn’t like I was a rebel, that would have been cool.  No, while the popular culture around me was saying we should listen to Tiffany trying to sing I saw him Standing There I railed and shouted how the Beatles version was vastly superior.

It didn’t improve much until after I’d gotten to college.  Whether worth the loss or not, I neglected and ignored even those who would have been exceptionally interesting friends to have around.  That was my older life . . . I wanted them away.  It didn’t mean I left my parents or home behind, I just enjoyed the stupendous isolation at times.  I taught myself guitar.  I joined a band . . . I’ll grant you, it wasn’t the greatest band ever.  Still, I found exposure to blues, jazz, all of it.  I met people who saw the world through the same kind of lens I did.  I didn’t regret the decisions . . . much.

That doesn’t mean I was cruel (I hope) or mean to those from whom I tried to isolate myself.  It took a great amount of introspection and looking at who I’d become to realize that my isolation and frustration were as much my own doing as the actions of others.  Sure, I was a crazy, geeky kid who loved Doctor Who and had a preference for much better music like Eric Clapton and Led Zeppelin and Dave Brubeck rather than one-hit-wonders that dominated the 1980’s.  But look at music today . . . with autotune giving even the most lyrically and sonically inept person thinking they can actually sing.  A Flock of Seagulls seem like Beethoven by comparison now.

I see glimmers of that same lanky kid from my past in each of my four kids.  The push to do things their own way, the frustration, even the disgust at times, even if it’s not particularly warranted.  I want to jump inside their heads and tell them that it’s not nearly as horrible as they think.  By the same token, though, I don’t want them to feel like it’s OK and actually good to be completely conforming to what everyone says.  I play them Neil Gaiman’s commencement speech where he says to do things differently . . . because if nobody’s done it before, there are no rules telling you that you can’t do it.  I tell them that playing the guitar in a band – whether everyone around you says you can do it or not – is perfectly fine.  I remember that I’d only been playing a year when I joined a band and was knock-kneed and scared stiff on a stage with a bunch of people ten years my senior. 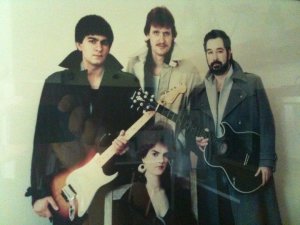 My point?  I am like most parents.  I don’t want the kids to go through a perceived suffering . . . looking at the world through those different lenses without realizing that sometimes it’s best to take the glasses off and look at the entire picture.  Sometimes you can be too focused.  Sometimes you can be too narrow.  That was certainly the way I was . . . until I’d gotten to college, and certainly until I met my future wife.

She showed me a beautiful, wild, and sometimes difficult woman could find someone like me – who walks just a few feet away from the path – attractive and interesting.  Did that make life easy?  No.  There were times I wanted to strangle her because she would only walk the path and I’d find things of interest off in the trees somewhere.  My advice to those four kids?  It’s OK to look at what is off the road . . . but I learned from my late wife that you should be aware of what’s ahead, too.

I am also aware that my wife found out from her best friend – who also happened to be a friend of mine from elementary school – that there was one thing about my family she needed to be aware of.

“The Manoucheris have a monumental intolerance for stupidity” was her line.

I couldn’t have put it better myself.